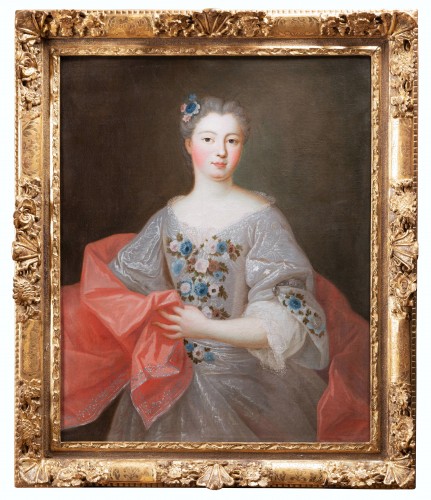 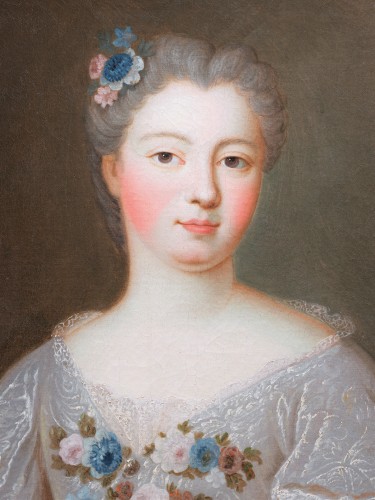 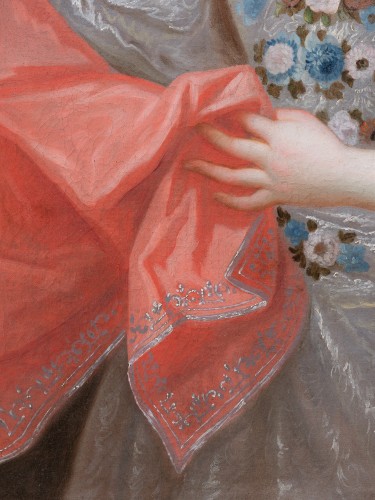 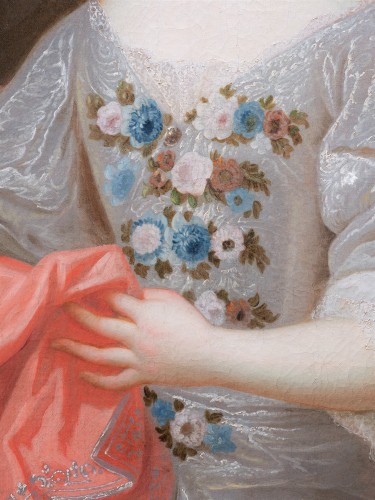 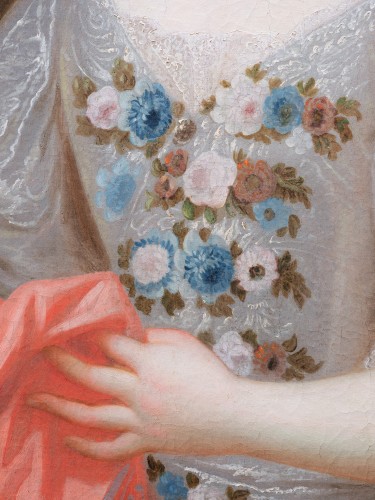 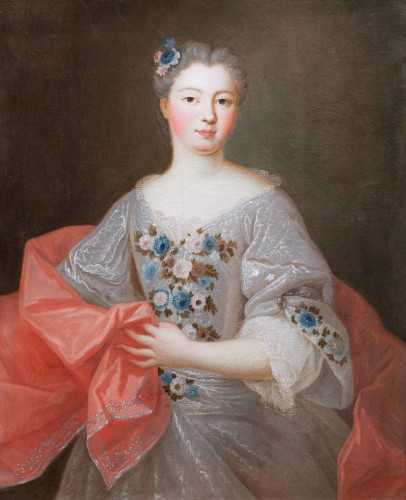 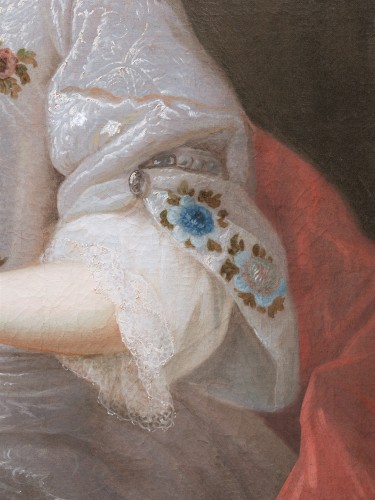 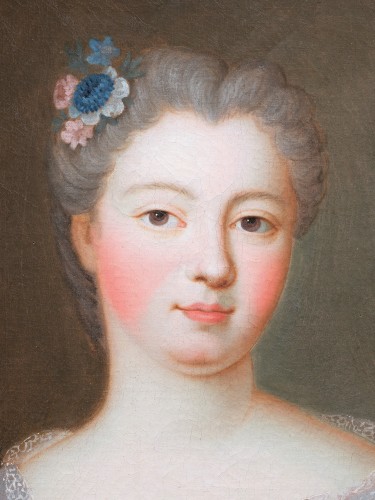 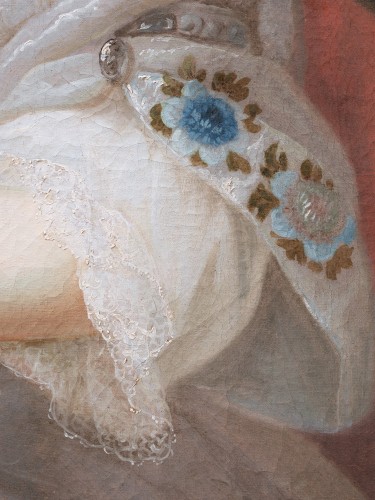 Lovely portrait depicting the Princess of Condé, Duchess of Bourbon, known as Mlle de Clermont, the granddaughter of Louis XIV as goddess Flora.
The princess is portrayed standing, wearing a gray satin dress embroidered with silver and wrapped in a loose salmon-pink stole with large broken pleats. Following the disguise as the goddess of spring, Flora, many flowers are stapled to the girl's bodice and sleeves.
The perfect oval face, the slightly long nose, and the rosy and full cheeks accentuate the freshness and youth of the model. Powdered hair adorned with a few flowers frame this youthful face.

Inscription on the back of the original canvas with the identification of the model: "Mlle de Clermont Princ Bourbon"

Marie Anne de Bourbon, known as Mlle de Clermont born October 16, 1697 and died August 11, 1741 is a member of the royal family of France and Superintendent of the Queen's Household from 1725 until her death.
Her face is known to us from the portraits of 1729 and 1733 painted by Jean Marc Nattier.
On the portrait that we're offering, we are in the presence of a very young princess aged 15.
No doubt commissioned by her father the Prince of Condé from Pierre Gobert's studio, the portrait was probably intended to be presented to potential suitors for the princess's hand.

Pierre Gobert (1662-1744) Son of Jean Gobert, sculptor to the King, grandson of Jean Gobert the eldest, carpenter sculptor, brother of Jean Gobert, known as the "ordinary painter to the King" Pierre Gobert was born in Paris or Fontainebleau in 1662. Trained perhaps through contact with Claude Lefèvre, he would have worked from 1679 for the court of Bavaria, painting the portrait of Marie-Anne, future Dauphine of France. Renewing her confidence in the artist, she commissioned a portrait of her son the Duke of Burgundy from Versailles in 1682. Received at the Academy of Painting on September 24, 1701, with the portraits of Corneille van Clève and Bon Boullogne, Pierre Gobert exhibited fifteen portraits at the Salon of 1704, and demonstrated his privileged access to the court: among these portraits were that of the Duchess of Maine and the little Duke of Brittany, the future Louis XV. Thanks to this reputation, and no doubt thanks to the intervention of Elisabeth-Charlotte, Gobert was approached by the Court of Lorraine in 1707, in order to paint the portrait of the Dukes of Lorraine, Elisabeth-Charlotte of Orléans and the four princesses. It is likely that Gobert developed a studio during this period, since he seems to have operated back and forth between Paris and Lorraine, and even had portraits sent from Paris. Gobert thus obtained the title of ordinary painter of the Duke of Lorraine, and continued to deliver portraits to the court, notably in 1719 and 1721. He thus participated in the artistic influence of the court of Lunéville, which sought to be part of the wake of Versailles. Back in Paris, on the strength of this prestigious introduction, which he took advantage of by bearing the title of “ordinary painter to the Duke of Lorraine”, Gobert then worked for the Condés and the Contis, and for the Prince-Elector Max Emmanuel of Bavaria. In 1737, the painter shone for the last time by presenting at the Salon one of his most ambitious portraits, that of the family of the Duke of Valentinois (Monaco, prince's palace). By the choice of his somewhat fixed attitudes, by the affected and graceful disposition of the fingers of his female models, by the use of historical travesties, by the depersonalized and flattering type of his resolutely placid faces, Gobert had managed to create thanks to his relentless and recognized work, a style which contrasted with the works of Largillierre and Rigaud, his contemporaries. 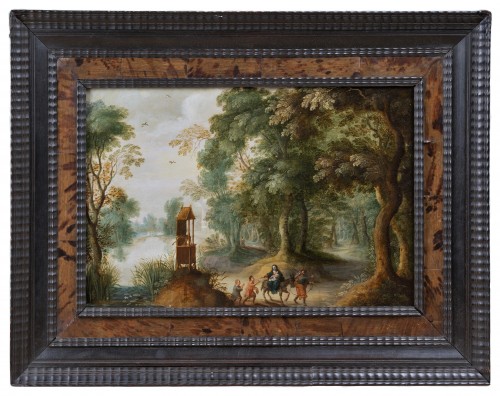 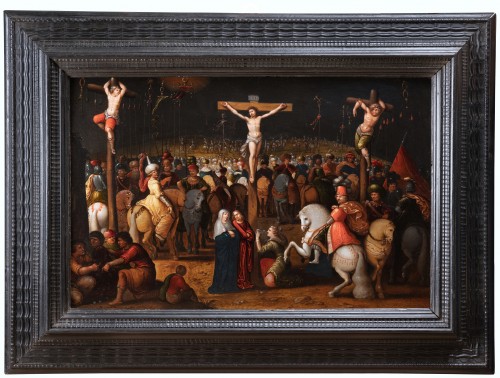 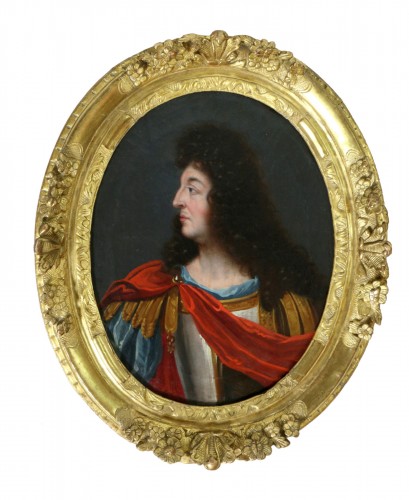 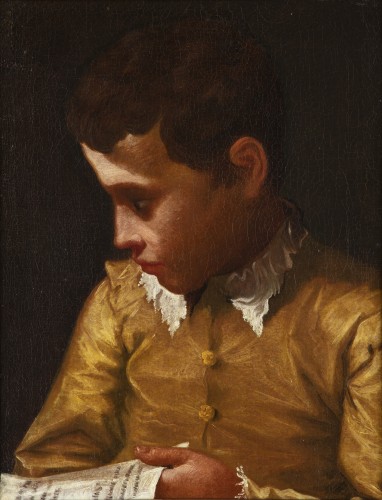 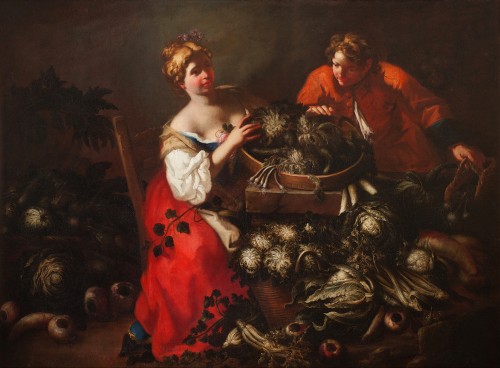